T he surname Galindo derives from the Spanish word 'gallinto'- cockerel and there are many instances of the name mainly occurring throughout the Spanish speaking world.

This web site, written as a result of painstaking research, aims to clarify the origins of the English branch of Galindos through to the present day.

Despite encountering many erroneous facts along the way, personal family correspondence handed down from my Great Grandmother, Jane Amelia Galindo, to my Mother, has enabled me to offer the definitive history of the English Galindos and their descendants two of whom, Philemon, his first son John and third son Philip who wrote the diary are of considerable interest.

Crucial surviving letters were sent to and from Samuel Galindo (1805-1886) a Professor of Languages in Exeter and son of James my 3 x Great Grandfather. Samuel was consulted around 1873 by Alfred Miles Galindo, a son of Percy his first cousin, as to where the Galindo surname had originated. Realizing that Alfred was the last surviving male to bear the Galindo name Samuel offered what remained of the family memorabilia, including a miniature of his father James, and a full length portrait of himself.

Alfred died in 1922 and this memorabilia was lost but Samuel's reply to a similar enquiry from Eliza Galindo, another second cousin, an unmarried daughter of Charles Galindo, was the basis of my research.

Samuel writes: My father's name was James, he was brother to the late Samuel Galindo of Tooting. He married twice: by his first marriage he had several sons, two of whom I know; Philemon, the elder, and James. Philemon, a fine handsome man, after a life wasted died in London about 40 years ago. James went to Jamaica and was employed in a sugar plantation....Galindo is a Spanish name and all of that name in England are descendants of Samuel or James- my uncle and my father- but of their predecessors I know nothing..... To read the full letter click here. 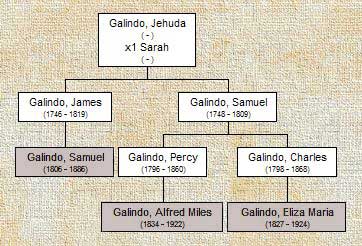 This baptism record shows that Samuel's parents were Jehudah and Sarah.

It follows that these are James' parents.

From The London Gazette. ( bottom of p2 continued p3): On 26 October 1765 Jehuda Galindo of Upper Holloway, a Dealer, having been declared a bankrupt was ordered to attend the Commissioners at the Guildhall to present his accounts. He was discharged in 1767. (All the best people went in and out of bankruptcy in those times!)

A Judah Galindo took out an Insurance Policy on property at New Court, Dukes Place, London in 1758 and 1777 with a widow Galindo named as the insurer of the same property in 1786.

This is the only Judah or Yehudah (in Hebrew, which to English ears would be Jehudah) to be found at that time and he must be the Jehudah referred to in Samuel's baptism. The records show he must have died around 1783 and taking Samuel's birth as 1748, Judah would have been 20+ at the time making him born around 1720.

Should there be any doubt about the Galindo faith and origins it is interesting to note the Old Bailey report of a trial in 1761, of one Edward Foster who was indicted for stealing a Bible and Common Prayer Book in the Spanish language from Sarah Galindo who stated:
I am a Jew; Mr Andrade brought a child to school (I teach school). He told me he had suspicion of a person he had seen in my yard. I went downstairs and missed two books...From Old Bailey Records.)

Many references to the Galindo surname can be found in London throughout the first half of the 18C. Records held by Bevis Marks Synagogue show that the Galindos that came to England and settled in London were Sephardi Jews from the Iberian peninsula. There were just a handful of Sephardi Jews in London in the mid C17 but the numbers gradually increased to the point where they needed a place of worship, a synagogue.


A converted house at No 5 Creechurch Lane was used initially and this was enlarged in 1674.
By 1700 the congregation had outgrown these premises and a new purpose built synagogue was built in a street called Bevis Marks in 1701. 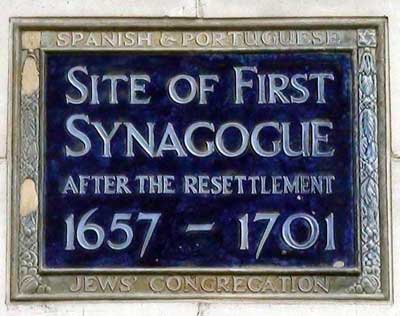 Bevis Marks is the oldest synagogue in Britain, it's records have survived the London Blitz and IRA bombs; the Circumcision records (1715-1775) are sprinkled with Galindo names, including Gabriel, Raphael, Abraham, Joseph and Judah (Jehudah).