P hilemon Galindo, actor, fencing master, linguist, a useful draughtsman and philanderer, was born in 1770 in Islington, the first son of James and Mary (Boyle ), moving to Bristol with his parents in 1789.
Nothing is known about his early life in London, the first references to him appear in 1789 when he married Frances DeLaRoche in Bristol. Living in St Michael's Hill at the time he stayed in Bristol 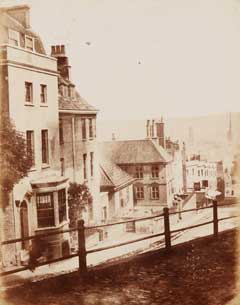 St Michael's Hill. Bristol
for the next ten years moving to Dublin in 1799 where he married(?) Catherine Gough an Irish actress. Travelling from Dublin to London, as Catherine's theatre performances dictated, he joined the London militia in 1804. Appointed Captain he happily kept the title for the rest of his life. During this period he develops an unfortunate passion for Sarah Siddons, a famous actress of the period.
By 1813 he is in Holybourne in Hampshire where he seems, as usual, to have led an unproductive life, no real records exist of his time there. It was here that he met his third and last 'wife' Ann Jeacocke who was to remain with him to the end. Returning to London in 1824 he lived off borrowed money and Anne who had some income of her own. In 1835 Philemon, by now 65, was persuaded by his son John (Juan) to take up an appointment as governor of Boca Toro in Central America. This was a dismal failure. Returning in 1837 he tried to take up his acting career again but died in 1840, age 70, of 'Senile Decay'.


The French Revolution starting in 1789, profoundly affected the English Establishment and resulted in The French Revolutionary wars in which France had conspicuous success in Europe. France was officially at war with Great Britain continuously from 1793 to 1802 when a peace treaty was signed. The Napoleonic wars followed from 1803 to 1814.
To counter the perceived threat of invasion an army of loyal volunteers was established. Volunteers were not expected to fight abroad, this being a useful means of avoiding conscription. Philemon, now 28 and accomplished in swordsmanship, appears in a booklet listing the members of the 10th Company, Bristol Volunteers, in 1798. He is described as a comedian living in St Michael's Hill Bristol not far from his family in Pipe Lane.
Competent in French and Spanish, an excellent draughtsman, actor and swordsman he must have seemed an ideal suitor for Frances DeLaRoche whom he married in St Augustine's Church, Bristol on 13th November 1789, they were both just 19.

Frances, born in Kingston Jamaica on August 15th 1770, was the daughter of William and Frances DeLaRoche wealthy landowners in Jamaica. She had two brothers, John (1768-1823) and William (1771-1800), all three married in England.
John married Martha Shipland in Marshfield, Gloucestershire his six children were born in either Jamaica or Thornbury, Gloucestershire, showing he travelled regularly between Jamaica and England. William married Elizabeth Gillam, died in 1800 and is buried in Almondsbury, Gloucestershire. More on the DeLaRoches.


At this time a wife's money became her husband's on marriage, Philemon was well set up with the money Frances had inherited from her uncle.

A first son, Philemon, was born in Bristol in August 1790 with a second son, George, born in Surrey in 1791, neither survived. The next child, a daughter Charlotte Delia, was born in Bristol in January 1793. Another son, Bothea, born in Bristol in 1794 did not survive, Portia born in 1798, the last child by Frances, did.
By now Philemon, 23, was a permanent member of the Company owning Bristol and Bath Royal Theatres. Permanent members of the Company were on a salary plus the ability to hold benefit nights if they felt popular and secure enough to take them.
As well as acting he offered classes in swordsmanship at his academies in Bristol and Bath where he sometimes offered an evening's entertainment. A one guinea subscription entitled the holder and two friends to six months entertainment.

Appearing regularly in both theatres from 1793 to 1799 he was able to hold a benefit night demonstrating his acting and swordsmanship skills under the patronage of the Bristol Military Association in July 1799. Click here to see the playbill .
It was almost his last appearance in Bristol and Bath.


A notice in Felix Farley's Journal of Oct 5th 1799 announces his departure.

Philemon seems to abandon his Bristol family when he left for Dublin. No clue can be found about the fate of his wife, Frances, it has been shown she was alive in May 1800. Philemon's mother, Mary, is still living in Bristol, presumably she and Frances cared for and brought up the two daughters using Frances' money. They were certainly well educated. 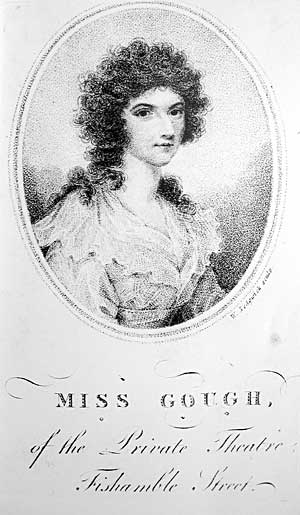 Image courtesy of the
National Library of Ireland
What the engagement was in Dublin is anyone's guess as no playbills have been found showing Philemon acting anywhere after he left Bristol. The couple moved regularly between Dublin and London where a daughter, Sarah Mary, was born in 1803 and another son, Philemon Alfred, in 1805.

Catherine was a successful actress commanding good money from her appearances in various theatres throughout England and Ireland, she was also receiving money from family annuities. Philemon, again seems to have chosen his partner wisely.
Whether they ever married is questionable. No marriage has ever been found within the tight time frame of May 1800, when Frances was alive, and 1802 when John was born. The fact that she called herself Mrs Galindo does not prove a marriage and in her booklet (see below) she states &#39A strong and perhaps fatal attachment united us; on my part I do not scruple to acknowledge I sacrificed more than prudence can excuse' which does not acknowledge a marriage.
Philemon had obtained a ' Military Appointment' in London by 1804, in a record of that year he is described as ' Adjutant in the Loyal London Volunteers 5th Regiment', this, of course, is not the regular Army. By 1810 he has the rank of Captain, a title he proudly used for the rest of his life.

A few letters survive from this time. One of the most interesting, refers to his artist's ability.

Ramsden was a surgeon and fellow officer of 5th Regiment, Loyal London Volunteers.

Philemon joined William Macready. in theatre management, and together they took over their first theatre, Chester, in February 1807.

Macready, having paid over the odds for the lease of the recently built New Theatre Royal in Manchester, persuaded Philemon to invest &pound3,500 to complete the decorations. Philemon raised this using his wife's money supplemented by a &pound1000 loan from Sarah Siddons.
The theatre opened on June 29th 1807 but was a disaster and the Galindo household was left in difficult financial circumstances and having to sell up (see advert here). The partnership between Philemon and Macready was formally dissolved in 1808.

Whilst in Dublin Philemon and Catherine were introduced to Sarah Siddons, a famous actress of the period by Martha (known as Patty) Wilkinson ( -1847) the daughter of Tate Wilkinson, Sarah's manager. She had become Sarah Siddons constant companion, dresser and minder. Seemingly responsible for Sarah's social diary she perhaps, as it turned out, made an error of judgement in introducing Philemon, (or was she prompted to by Sarah?). Sarah became Catherine's firm friend and, before it all went wrong, became godmother to Sarah Mary, Philemon and Catherine's daughter. Patty would remain at Sarah's side until the latter's death, she is buried beside her.


Following the failure of the theatre management business, Catherine accused Philemon, perhaps with some justification, of having had an affair with Sarah Siddons and blaming her for the collapse of her domestic harmony, publishing a book 'Letter to Mrs Siddons' in 1809. Click here for a full transcript of the book which tells it's own story. Whether or not there was a covert relationship between Siddons and Galindo, she was made godmother to the Galindos' daughter in July 1803. In this book, and elsewhere, it was suggested that Sarah Siddons took on the lead role in Hamlet as a pretext to be taught fencing by Philemon. 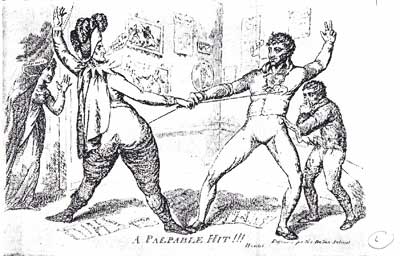 This scenario was taken up by 'The Dublin Satirist' of January 1810 in a lampoon titled 'Philemon Galindo and Mrs Siddons'. In this he is described as a pantomime buffoon.


A further example of Philemon's artistic skills can be seen in the picture of Sarah Siddon's house, Westbourne Farm. Paddington, which Philemon must have visited.


Sarah Siddons would have had great influence in the theatre world and after the booklet was published in 1809 Catherine would have been unable to get work. London would have become uncomfortable for them. 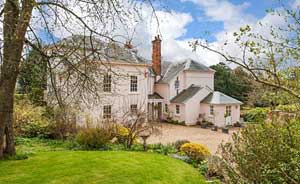