S amuel Galindo, 1748-1809, was the complete opposite of James his elder brother. A solid industrious family man he followed in the Galindo tradition becoming a merchant of various products all his life. He first appears as a Hop Merchant in a directory of 1776 at 9 Cree Church LaneLeadenhall Street staying at this address until 1782.
Cree Church Lane was at the very centre of the Jewish community. 1782 was a decisive year for Samuel as he decided to defect from the Jewish faith and join the Anglican congregation. A baptism on April 1 of that year at St Andrew's Holborn records the event giving his father as Jehuda and his mother as Sarah. He was 34. It is probable that he took this serious step as he was attracted to Elizabeth Miles, 18 at the time, whose parents, John and Elizabeth were staunch protestants and would have disapproved of their daughter marrying a Jew. Managing to convince them of his good standing and intentions, he and Elizabeth were married on January 18th 1784 at Wanstead in Essex He was 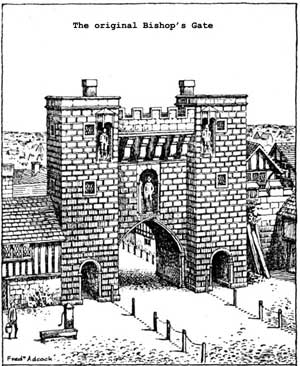 36 she was just 19. To escape the censure of his Jewish peers he moved to Bishopsgate. Perhaps doors were closed preventing him being a merchant as he becomes a pin maker initially in association with Morris Hime but later on his own, a trade he carried on until at least 1790. By 1793 he is in partnership with John and Richard Miles, his brother and father in Law as wholesale upholsterers and warehouse men. Richard retired from the business in 1794, the Company then called Miles, Galindo & Co. A James Lawrence joined the business but this new partnership was dissolved on March 31st 1797. Samuel died &#34after a severe and lingering illness" on 29th July 1809 and was buried in St Helen's Bishopsgate on August 7th.


In various references after his death he is referred to as Samuel Galindo of Tooting. In his will he refers to "selling my leasehold estate in Tooting" as well as properties in Bishopsgate and Bevis Marks (a street). It has been difficult to pinpoint exactly where the Tooting property was. There are two clues: In Cary's 'New Itinerary..of the Great Roads...throughout England and Wales' (1802) there appears this reference:


And from 'Picturesque Rides and Walks...thirty miles around the British ;Metropolis'. By J Hassell (1815): 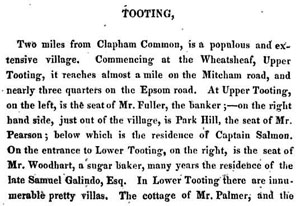 From the above, the probable location of the property can be shown on a map of 1815.

Samuel and Elizabeth had ten children the first eight children born in Bishopsgate the last two, from 1798, born in Streatham (Tooting).

More about the children 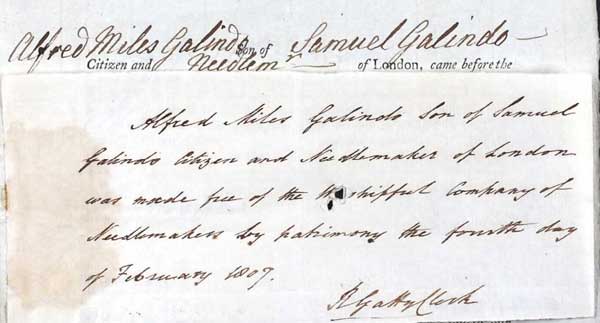 Was this union blessed with children? Two were baptised together at St James' Paddington in August 1833, the same month that Alfred died! The baptism record gives Elizabeth Ansdell (Galindo) date of birth July 6th 1832 and Harriette Ansdell (Galindo) as March 13th 1833.
On their marriage certificates both girls record Alfred Miles as their father.

In March 1841, Elizabeth had two further children baptised also in St James' Paddington, again giving 'Alfred, office clerk', as the father.
The first, Augustus Frederick, the baptism records show, was born on October 23 1834, but this is two years after Alfred died!
On his marriage certificate in 1860 he gives Augustus James Galindo as his father.

The second, Jane Louisa Galindo, born Dec 20th 1836 also gives Augustus Galindo as her father on her marriage certificate in 1853.

In his will, dated January 1825, Alfred leaves all his estate to his mother. When he died in 1833 his wife alleged he died intestate but the will was duly found and proved, she received nothing. All this suggests Alfred had a problem and Elizabeth found solace elsewhere!
The first daughter, Elizabeth Ansdell (Galindo) married Joseph Jules Daumer, Harriette Ansdell (Galindo) married Alexander Pilbeam leading to Nova Pilbeam, a famous actress and Jane married Andre Caminada d'Antonio. The only chance of carrying the Galindo name on this branch was through Augustus Frederick. He married Emma Gosdeling.
They had four children born in London of which only Charles Frederick (1863-1910) survived. Augustus and Emma later moved to India where they had a further five children of which only Louisa Ellen Grace (1870-1893) survived.
Louisa married William Isaac Newton De Lange in India in 1889. They had two children, Marie Dewar De Lange b 1892 and Frederick Charles De Lange (1893-1938)

Charles Frederick married Gladys Woodroofe in Australia in 1936 they only had daughters so again the name died out.


Samuel (1790-1853).
In about 1820, Elizabeth, Samuel senior's widow, moved to the Ross on Wye/Monmouth area with her sons Samuel, Percy and Charles.
The Game Acts of 1784 and 1785 required anyone killing game to buy a certificate at a cost of two guineas a year. In 1821 through to at least 1828 Samuel, of Glasbury Radnorshire, (now Powys) purchases such a certificate. Glasbury on Wye is 4 miles from Hay on Wye and 25 miles from Hereford, the nearest city.
Samuel was never far from his mother but whether they had a house in Glasbury or Hereford, with perhaps game rights in Glasbury, has yet to be established.